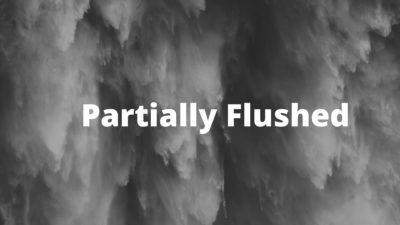 7 reasons why a public toilet is partially flushed

You never know what to expect when visiting a public toilet at a train station, shopping mall or a famous music festival. One has no control for the state of these facilities. As the condition of these units is at the mercy of the commitment of the cleaning staff and the toilet habits of the previous users.  For men, there is not a lot that could go wrong when using the urinals. That is not the case with the stalls, as one could be confronted with the most pleasant or unpleasant of situations.

Staring into the toilet bowl before use is highly anticipated as one is never sure of what to expect. You’ve met a partially flushed toilet and wondering why the previous user did not leave the facility better than they met it. From your observation, it is pretty clear that an attempt was made to flush the toilet but there are some remnants of the poop or traces of urine. Most people are left with no option than to flush before use. But are left wondering about the possible reasons for the partially flushed toilets.

1) Poor water pressure: One of the reasons for a partially flushed toilet could be low water pressure. The common causes of low water pressure in toilets are a shut-off valve being closed or blocked faucet. More extreme reasons could be plumbing blockages or water leaks. When these occur, users may have to run a few flushes before every remnant is washed away.

2) Releasing the flush too early: Public toilets come with different flush systems. Some will require a user to press down for a sustained period to ensure the entire water in the tank is released. When a user fails to hold down for the required period, only a limited amount of water and pressure is released. This could lead to a weak flush which contributes to traces being left behind.

3) User is in a hurry: To flush some poop, it could require a few rounds of flushes. Some people may be catching a train and do not have sufficient time for the tank to refill and execute a second or third flush. This leads to a partially flushed unit.

5) Deep in thought or forgetfulness: We all know it is hygienic to cover the toilet when flushing. This helps prevent bacteria from jumping to toilet surfaces. Some users may be too busy thinking about the television series and fail to open the toilet cover to check it is a thorough flush before leaving the facility.

6) Slow filling toilet tank: Toilet tanks of some public facilities may have a slow refill rate. It is understood that some toilet tanks could refill in about 3 minutes depending on the water pressure. Not every user can wait for a toilet tank to refill before completing a new round of flush. This could contribute to partial flush problems is facilities

These are some reasons behind the partially flushed toilet.