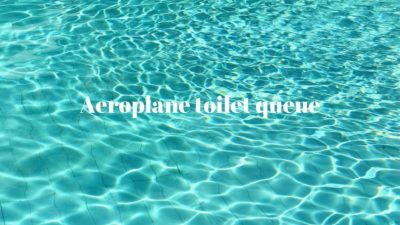 One of the conveniences or inconveniences of flying is the need to use the toilet. Some travellers avoid eating and stick to just fluids to avoid having to do a number two. Others, ensure they force themselves to do a poop before boarding the plane. Others do not see any challenge or concern in doing their business in an aeroplane toilet. The comfort of knowing the sound from the flight will subdue any bowel symphony leaves them assured and at ease. Our focus is on travellers who may not be too comfortable using the toilets provided at the aircraft.

Arthur Schopenhauer, once said, “It is a wise thing to be polite; consequently, it is a stupid thing to be rude.” Being polite is always a great attribute to exhibit in life. It is more difficult to remain polite when we are pressed and in a queuing situation.  Ever found yourself waiting for a delayed train during rush hour? Your train has been delayed for over 20 minutes at one of the busiest train stations in London at the peak of summer. You intermittently catch the gaze of upset travellers frantically taking a peep on the information board. This scene plays out to the character of travellers who may have lost a large chunk of their politeness. People are stepping on the foot of others and jumping the train queue unashamedly. it’s chaos and things are simply out of control you imagine.

The picture of a busy train platform could be likened to passengers queuing to use the toilet facility during a long haul journey. The queue might be made up of people interested in completing a number one, two, brushing their teeth or changing a baby.  There is a peak and off-peak period to use an aeroplane toilet. A couple of minutes after a meal may be a busy period as a few people may have the urge to use the toilet after eating an airline meal. It could be as a result of eating something new, with a different flavour or the altitude.

One reason behind continuously surrendering  your queue spot

It is quite difficult to be extremely polite when pressed for a number two. In  a few cases, a passenger may continuously surrender their queue spot for those queuing behind them. Could this be as a result of sheer politeness? Or, they just fancy queuing? One main reason why someone will continuously offer their toilet spot to each individual behind them is that they are uncomfortable being identified as one whose poop has an offensive odour. They can’t stand looking into the eyes of the successor of the toilet. Constantly permitting everyone else to use the toilet before them ensures they will be the last in the queue and can comfortably empty their bowels without worrying someone else is waiting to use the facility. Next time someone on an aeroplane beckons to you to go ahead and use the facility, don’t assume it is just politeness. It could be down to the fear of being embarrassed than politeness.