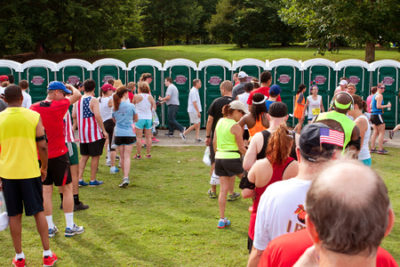 When the portable toilet comes to a marathon runner’s rescue

Portable toilets are a common feature in most running events like the Marathon. These units are mostly placed at the start and along vital points of the running course to make it easy for runners to quickly stop to do a number one or two.

Four years ago, I decided to take part in the Helsinki city marathon event that started just outside the Reliability 5G Arena and finished inside the prestigious Olympic stadium. Like most marathon events, there were portable toilet facilities at the starting point of the race for the 6,000 plus runners who took part. Unlike most running events, the Helsinki marathon began during the later part of the day which meant most runners began their race just after 3pm. An afternoon marathon run made it quite difficult to ascertain what, when and the right amount of food to consume before the run. This made it quite interesting and challenging for runners as most runners were taking part in their first afternoon marathon event.

I was one of those runners who found it slightly challenging to ascertain the cutoff point of my last meal before the race as this was an afternoon marathon. The route of the Marathon was scenic with mesmerizing architecture and intriguing landscapes. Running along the coast land of the Baltic Sea brought great chills and a cool breeze as we pounded the clean Nordic streets. Despite the natural beauty of Helsinki, a questionable sandwich before the run made me think a lot about portable toilets.

Portable toilets at Helsinki marathon coming to the rescue

I was trying so hard to get to the finish line before answering the call of nature but as each kilometer went by, the thought of having an accident ran through my tiring mind. The biggest concern was not the cleanliness of the toilets but losing time doing a number two which could prevent me from achieving my personal best. After the first 10 km, the struggle was real and it became apparent that I wouldn’t be able to complete the full course of 42 km without using a portable toilet. The Marathon organisers provided a good number of standard portable toilets and urinals along the course to cater for runners like me who have either eaten an inappropriate food before the race or are just pressed out of a natural cause. The provision of adequate portable toilets and urinals prevented runners from doing a number one on the alluring side paths or lavish greens of Helsinki.

As I was running past each portable toilet, I realised that emptying my bowels would help improve my running pace and reduce the distraction in my head. At about the 20 km mark, I bit the bullet and stopped to use one of the standard portable toilet units. The Marathon organisers ensured there was a good portable toilet facility to runners’ ratio which ensured I had free access to use the portable toilet without having to queue up. At the end, I completed the Marathon in a new personal best and this was made possible by a great training plan and ensuring I answered the call of nature around the half way mark. Portable toilets are quite essential in competitions like marathons and runners are always put at ease when there are sufficient facilities along the course.