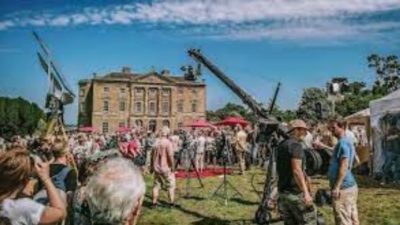 The importance of portable toilets at TV and movie locations

Either on Netflix, Amazon Prime, any other streaming services or your local cinema. Films or TV programmes are one of the most popular mediums for storytelling. We love a great story to either make us laugh, cry, feel inspired or simply entertained. Our brain loves a good story due to the sense of connection it creates between us and the characters on display.

Location plays a big part in the effectiveness and the outcome of a programme. It sets the scene for a movie or a TV programme and is largely regarded as the most important character in the script. A fun fact for your pleasure. Did you know Central Park in New York City is regarded as the most popular set location in the TV and film industry? It has been used over 231 times for popular movies such as John Wick, Men in Black II and a host of others. In second place of the popularity contest is Venice Beach. It serves as the set for movies such as Million Dollar Baby and American Pie. Now enough of the movie lecture. Our aim in this piece is to explore the benefits of portable toilets at film and TV sets.

Advantages of portable toilets at movie and TV locations

Some production companies hire mobile units to serve the duration of an actual shoot. The benefits of opting for this choice also depend on the available facilities at a given set. This is assuming there is an absence or a limited number of restroom facilities available. Let’s dive straight into the benefits of hiring a portable toilet for your project.

1) It simplifies the choice of the desired location: Producers and directors will often have certain locations in mind which they feel will be a perfect fit for their script. Sometimes, lack of public convenience may lead to reconsideration or flirting with a Plan B. Knowing the hiring of mobile facilities is a strong possibility will ensure the first choice set remains viable as long as other conditions check out.

2) It saves time on the shooting scene: The capturing of movie scenes could be quite a time-consuming task due to retakes and plot modifications. Something else that could extend the time it takes to shoot is the demand and usage of restroom facilities. Placing mobile units at strategic points in a movie set will reduce the travel time for characters to locate and use a given facility. Overall, saving time is critical to ensuring the entire project is on track

We are hoping you won’t be thinking about portable toilets the next time you watch a movie or TV series. The above are some of the benefits of mobile toilets at film or TV sites.