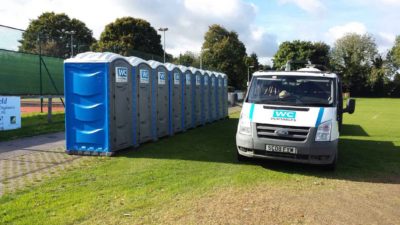 Event: The Tring running club organised the Ridgeway Run held on October 8th, 2017. The run dates as far back as 1982 and it is a demanding run of about 15 kilometers that covers a panoramic route comprising footpaths, bridleways with spectacular Chiltern sights. The race commenced from the fringes of Tring, progressed into the Ashridge Estate and ventured into the popular Pistone Hill and Ridgeway path before reverting into the peaceful paths in Tring, concluding at the Cricket Club.

Work carried out: Our team was contacted by the race leadership team to provide portable toilets for the participants. The route was evaluated to ensure there was great accessibility to the venue for our vans. We worked with the race organisers to ensure the appropriate range and quantity of toilets was hired to provide runners with adequate units. In total, 10 single units were provided for the event

Result: The organisers were happy with the quality and cleanliness of the portable units. We also ensured they were laid out in a way that prevented the unnecessary build up of queues. The runners found it quite easy to queue up and use the units as they were placed in strategic points. Overall, the runners had a great race and did not have to worry about the accessibility to portable toilets. A happy race management team and satisfied runners makes the WC team an excited bunch.