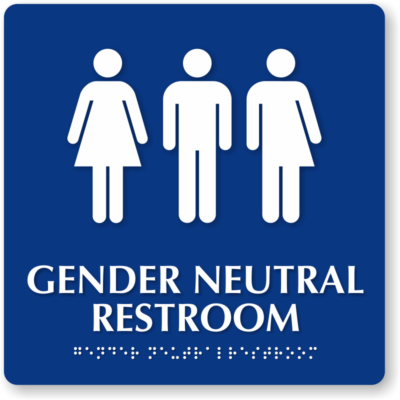 The arguments for gender-neutral public toilets

Most public toilets in the UK are separated along gender lines. It is quite common to see a queue outside the female toilets due to the lack of cubicles in these units and other reasons. There is a constant debate for and against gender-neutral public toilets and certain places are testing the effectiveness of having a common loo for both sexes.

2) Reduction of loo queues: The female public toilet is constantly dealing with long queues at peak periods and at busy locations. This has inspired countries like Germany to introduce female urinals to help in the reduction of queues. It is believed that gender-neutral toilets will provide ladies with more toilet stalls as opposed to a gender-specific one. Achieving a reduction in loo queues will certainly be a product of sufficient units to accommodate everyone seeking to answer a number one or two.

3) Accommodating all gender identities: Introducing a gender-neutral toilet will help those with a gender of choice or transgenders feel comfortable using unisex facilities. A unisex bathroom will help prevent the number of harassment experienced by transgenders. As reports suggest that about 70% of transgender experience verbal harassment in gender-specific toilets and about 10% were physically assaulted

4) Full utilisation of cleaning personnel: Most public toilets have male and female cleaners who periodically clean these facilities and make them more hygienic. In locations such as shopping malls, train stations and outdoor facilities, female workers are able to clean the male or female toilets whilst their male colleagues can only work on the male facilities. With gender-neutral public units, male and female cleaners can both work on the restrooms, thereby ensuring high hygienic standards at most times.

5) More family friendly: Unisex toilets will be more accommodating to traditional families requiring diaper changing tables. At present, most diaper changing tables are situated in female toilets preventing dads from showcasing their tender and fathering skills. This compels the mums to take a baby for a change in public facilities. A unisex toilet will help both parents take a turn in wiping the behind of the little one.

Usually, portable toilet units hired for events can be gender neutral and help users experience all the benefits listed above. The public facilities could help reduce the queues at outdoor events such as a marathon, music festivals and outdoor wedding celebrations. While unisex toilet facilities have not gained sufficient publicity and adoption it is great to acknowledge their benefits in modern day society.